Product description of the Bleeder valve

100% Brake performance - The stahlbus®-Bleeding System for Bleeding brakes, clutches or any other hydraulic system

What use is the most advanced braking system when the braking performance is strong affected by air in the system and in extreme cases can lead to total failure? Here is our approach to 100% brake power. For the first time the patented stahlbus ® bleeding system allows an air-free filling of hydraulic systems such as brakes and clutches. Improve your brake performance by using our products. The exact way you see here. You can easily bleeding brakes, clutches or any other hydraulic system with one person.

How old is your brake fluid?

Brake fluid is a safety-relevant wear part. This is a fact only a few people are aware of. It should be changed at the latest every two years. Similar to the brake pads and brake disks, the brake fluid contributes essentially to the braking power. Old brake fluid may be compressed and may thus lead to brake failure. New brake fluid maintains the pressure.

The stahlbus® Bleeder Valve was thoroughly tested by the TÜV Rhineland Group (Technical Inspection Agency). With best results. Because the brake fluid is as
decisive for the brake application as are brake pads and brake disks! The most expensive and state-of-the-art braking system does not make any sense if there
is air in the system.

For this reason, our stahlbus® bleed system is also successfully used in motor sports and aviation. 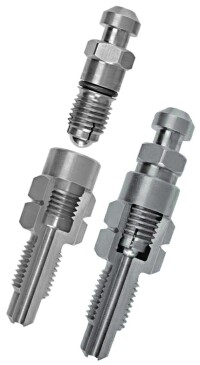 The constant opening and closing of conventional bleeder screws during the bleeding brakes process wears the aluminum thread in the cylinder (e.g. of the caliper) in such a way that clearances start to appear with time. At the worst, the cylinder may become defective. Another disadvantage is that the thread of an opened bleeder screw does not seal.

The stahlbus® Bleeder Valve is different, because it consists of two parts with a non-return function. During bleeding brakes, clutches or any other hydraulic system and filling, only the upper part with the integrated O-ring seal is unscrewed. This prevents both air and brake fluid or hydraulic fluid to ingress through the opened thread. In addition, it is no longer necessary to open and close the system synchronously due to the non-return valve. In case of pressure loss the Stahlbus® Bleeder Valve closes independently until the next bleeding pressure is built up.

Thus, the complete system bleeding is achieved within minutes. Single-handedly, without assistance. 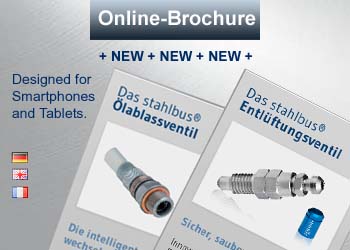